The multi-month Pin Challenge is finally complete! This was work in the end with 2 strands of size 10 crochet thread. I began with a ball of bamboo thread that I had laying around. Then I switched to mixing a strand of metallic thread to give it a bit of sparkle. That quickly lost it's appeal because it was such a hassle trying to keep the threads from tangling with one another. The effect was very pretty, I simply didn't have the patience to keep all those threads together. So I began again, with 2 strands of thread. 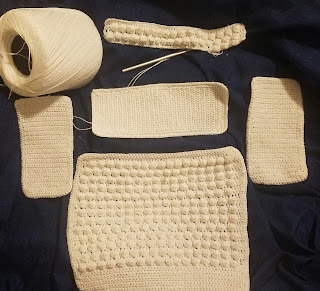 After completing the base and side panels, I went to work on the bobble panel of the purse. After one was done, I saw my tension needed to be reworked, so I unraveled it and began again.

The smaller ball is some of the thread from the larger ball rewound onto it to make it easier to manage the threads. I joined the sides together because I kept misplacing them and didn't want to have to redo those as well. 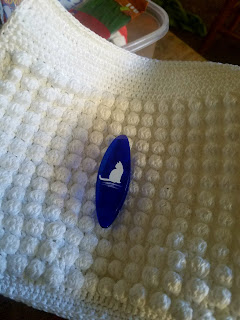 This is one completed bobble panel! I was so happy when it was done. 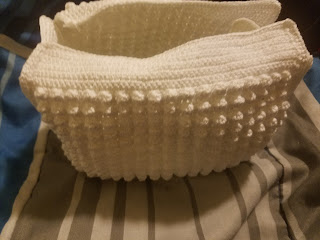 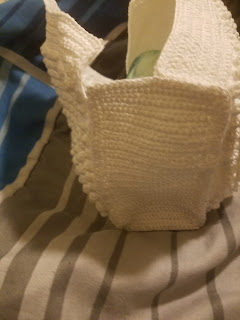 My sewing skills are almost non-existent so I did my best to join them without being too rough. I have to say, as I was joining the second bobble panel, I got nervous. The opening left was not very much and I was afraid of how tight the top would end up. 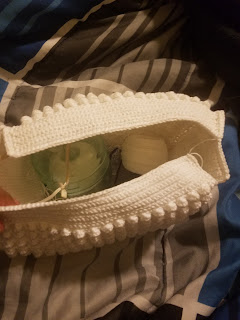 It seems to hold quite a bit for being small. Now the instructions say to reinforce it with some crafting foam or something similar. I didn't do it at this stage because the bag has gotten a bit dingy with all the handling. I also had to try and find the finding to attach the handles to the purse. I actually didn't want to spend anymore on this purse, so I looked through my stash until I found some mini buckles that are for para-cord bracelet making. There were 6 in the pack, so I was thinking of doing a longer handles for when I wanted to use it as a backpack or crossover purse. This is where the buckles made it adaptable. I did buy the zipper in black to match the buckles and try to bring in the colors together. 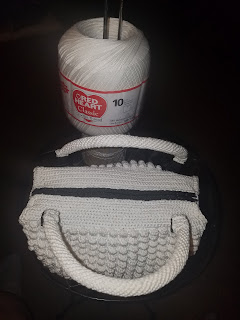 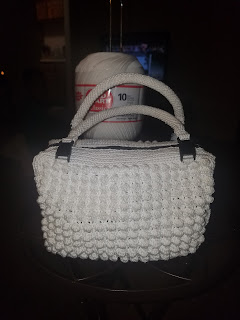 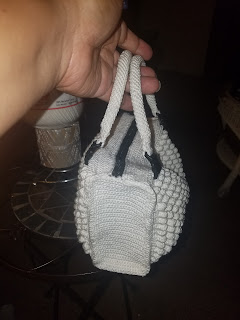 This little purse holds quite a bit of stuff and is just the right size for me. The edges there a bit pronounced, and I thought of undoing that and restitching it. Then, my youngest said the words I dread..."Mom, is that for me?" It took me 2 balls of size 10 thread crochet thread and almost 6 months of work to get it done. Making another one with my hands muscle memory still fresh shouldn't be too hard right?
at 3:06:00 PM 3 comments: